All my Christian life, I have always sung and learnt about Jesus being the Great Counsellor but not really sure how it works. My logical mind says that a counsellor should be one whom you can physically talk to and get a response from in order to feel some sort of comfort. But in recent weeks, in my busy-ness, tiredness and frustrations, I really felt the true reason why He is known, among many names, as the Great Counsellor. The peace and comfort that descended upon me when I pour out my thoughts to Him, cannot be compared to anything else and truly at that point and even now I just stand in awe of the Almighty One. Always there for me. Thank you Jesus for your love to me...
Posted by Dini at 1:54 PM No comments:

Introducing Lycia at 7 mths...she sleeps well, drinks well, has two bottom teeth and moves fast...she is a blessed kid and pray she continues to grow well. 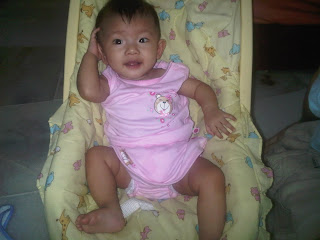 181010 is another change in my life and all in God's good timing. I have scheduled for C Sect in the morning at 10.30 a.m. with my gynae. It was supposed to be at 1.30 p.m. but as he was due to fly off to attend an overseas conference, he brought the op earlier so that he could make sure that I was ok before leaving...how sweet...:)

Anyhow that morning, and even that evening before, I just had this peaceful feeling that it is indeed the right time for Alycia to come into the world. On the way to the hospital, traffic was smooth, it was raining lightly and lo and behold there were two rainbows in the sky. It was such a beautiful sight and I just felt peace. Had a good chit chat with John in the car and arrived at the hospital in good time. The nurse at the post natal ward said that I came just at the right time as there was only one single room left , the rest all fully taken up. When I told my bro abt the two rainbows he very nicely put it as Arielle and Aaron welcoming the little sister into the world.

I had all the medical pre-op steps in my mind that I had to go through before the actual op, all of which I did not like, so mentally I was occupied with slashing off the steps that I have completed, bringing me closer to the last chapter of child birth in my diary. At 10.30 a.m. I was wheeled into OT. Got my epidural jab and then heard my gynae's voice asking impatiently.."where is the midwife? why do I always have to wait for them?" Waited for about 10 mins for the midwife to come. I was getting impatient as well as I wanted it to get it all over and done with. Finally the mid wife came and I think we started at abt 10.45 a.m.

This time I was kind of amused at how my gynae was using my body organs to test a trainee nurse like asking her "what is this muscle called", "what brings blood to this organ" etc...I remember thinking..."ahyoh, using my insides to conduct an anatomy lesson"...oh well I think if I was the trainee nurse, I would have given up the job from the way my gynae was sarcastic at her wrong answers. Well he had a pt...surgical procedures are rather critical and having trainees around should be a no no. Anyhow, after 15 mins or so, he pulled Alycia out after a "tug of war" session with my body at 11.09 a.m...hearing her cry was such a sweet sound in my ears and seeing her after that just melted my heart. The anaesthetic told me..she has such nice lips and mouth. Such a bessing! My gynae kept rassuring me after that that I was doing well and that it was almost over. At abt 11.45 a.m. I was wheeled out of OT and stayed in the landing area for an hour in case of any complications. All went well and at about 1 p.m. was wheeled back into my room , reunited with John.

Glad that its all over and now to raise her well in God's awesome blessing. Pray that in her first year of life she will be in good health and thereafter.
Posted by Dini at 2:56 PM 1 comment:

I have never had any nose bleeds before but during this pregnancy so far, I have had 4 nose bleeds..and I was not rubbing that hard as I normally do. I do have an itchy nose on and off and I do rub really hard usually to settle the itchiness once and for all but these few times I don't think I rubbed that hard. Three times while brushing my teeth and the 4th this morning as I was about to go to work. The bleeds don't last long...after blowing a few times and wiping off, they just stop. But my thoughts do go wild...do I have cancer of the nose...what will happen to my kids especially my Arielle who is so attached to me....then I feel kind of sad. Jon has asked me to see the Doc but I don't think I want to in case its serious. Just want to have my baby first and then see how. I searched the net and noted that some pregnant women do get nose bleeds very often due to the increased blood flow in their bodies. So I will just put it down to that although this is the first such experience. Will maybe highlight to my gynae this week when I see him.

Another first is a bad flu and cough. I have never really have it bad and never really seen a dr. for a few days of running nose and cough but the last 3 weeks..I have had a bad flu, went to see my GP, took some medication, forgot to inform my gynae during the last visit and down with a bad cough and phelgm now. Took the med given by my GP last time as I did not complete the course in case it affects my babe even though I was told its pregnancy safe. Oh well ...I just pray my babe is alright.

Arielle is becoming a great jie jie. Can really see that she is protective over Aaron and loves him so. When someone wants to carry him away, she will start to cry. She gets upset when he does not sit in his chair strapped with the seatbelt. When he climbs out, she scolds him. When I get panicky during the journey with Aaron loose, she will scream and ask me to "leave him, leave him" cos I will be pulling him to hold him in place. When I scold him for disturbing jie jie, at times she will say "never mind, leave him". She must have ti ti at home at night. Cannot leave him at po po's house. When we are at the supermarket and I threaten to leave him there she will pull and push him towards me and then ask me to "take him la ma". Its really cute to see them as Aaron adoringly calls "jie jie".."jie jie".
Posted by Dini at 10:47 AM 3 comments:

How time flies, Aaron is 2 today. What a journey he has been through with meningitis at 6 weeks, hands, foot and mouth at 6 months, bronchitis at 9 months and fever on and off, here and there. Now at 2, he is growing to be a tall "young man" though getting increasingly stubborn with a mind of his own. And all this while Thank God that He has led Aaron through every step. Aaron is God's blessing to us and he brings joy to the Gohs and Wees every hour of the day. His che che adores him though at time he infuriates her. Oh well...now to give him some form of toilet training of which I have been guilty of not doing yet....

Aaron, May God continue to bless you with wisdom, strength and stature. May good people always come your way and May you be a blessing to others always. and in whatever you do May you have God in mind. Amen.
Posted by Dini at 9:41 AM 2 comments:

26 weeks and still counting down. Time seems to go by so slowly..I just want to get the delivery over and done with. I guess I am just fearful of the experience, especially the pain. I have a low pain tolerance you see. I also cannot wait to see my babe. Am filled with so much joy with my current two and I pray for wellness for the upcoming one. Though the first year will be filled with lots of ups and downs, I hope that as a family and with God's strength and faithfulness, we will be able to cope well.

Arielle will be 4 towards the year end and Aaron will turn 2 at the end of this week. Arielle is getting mature by the day but Aaron is getting more mischevious. With another "A" coming, I really wonder how life will be like? Well I'll cross the bridge when I reach it. In the meantime don't think about it and take one step at the time.
Posted by Dini at 10:07 AM 2 comments:

Dini
I am City Girl married to a Kampung Boy living in the City!